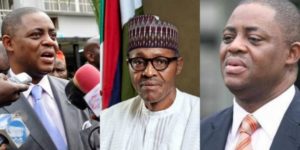 Former minister of aviation, Femi Fani-Kayode has revealed that President Muhammadu Buhari is not considering extending his stay in office beyond 2023.

The political space in Nigeria has been filled with rumours that President Buhari is considering extending his stay beyond the constitutional two terms in office.

Reacting to the rumours, the former minister pointed out that the President does not have a third term agenda.

He went further to say that, what is in the political pipeline is a Northern agenda.

My brother Femi Falani SAN has suggested that @MBuhari has a third term agenda. He is wrong. There is no “third term agenda” but there is a “northern agenda”. The plan is to ensure that another core northern Muslim from NE or NW takes over from Buhari to finish what he started.