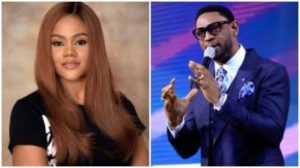 Busola Dakolo is demanding an apology from COZA pastor, Biodun Fatoyinbo for allegedly raping her when she was 18years old.

Busola Dakolo has told a High Court of the Federal Capital Territory in Abuja that the rape allegedly committed against her by the founder and Senior Pastor of Commonwealth of Zion Assembly, Biodun Fatoyinbo, has adversely affected her marital sex life.

She, therefore, demanded “a personal letter of apology” from the cleric to show honest remorse for his misdeeds.

Busola Dakolo, a photographer and wife of the musician, Timi Dakolo, had in June accused the founder of Commonwealth of Zion Assembly, Pastor Abiodun Fatoyinbo of rape.

HOT:  “How I Stayed Relevant Over The Years” – Linda Ikeji Reveals