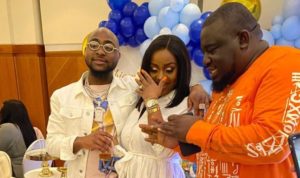 It’s ‘a good time’ for Nigerian musician Davido as he continues to enjoy some of the rare gifts life can offer. The ‘Risky’ crooner and his fiancee Chioma recently had a naming ceremony for their baby boy.

You’ll recall that Davido and Chioma welcomed their first child together a few weeks ago in London. The couple have put together a naming ceremony for their son.

The event was also in London and was attended by members of the family, friends and close associates. The baby’s name is David Adedeji Ifeanyi Adeleke Jnr.

In some of the clips from the little ceremony, Davido was captured saying a prayer for his son and also having a dance with his fiancee Chioma.