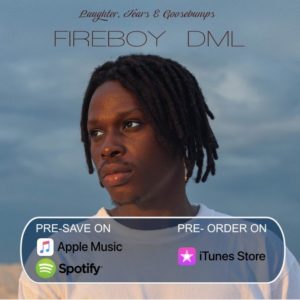 Adedamola Adefolahan better known by his moniker Fireboy DML would be dropping his debut album on us in a short while. After a successful 2019, Fireboy will crown it all with a studio album.

Plans are in top gear for a smooth roll out of Fireboy DML debut album titled ‘Laughter, Tears & Goosebumps‘. After hit songs like ‘King‘, ‘Jealous’, ‘What If I Say‘ etc more music from the Headies Award nominee should be expected in form of an album.

The album has been aptly titled ‘Laughter, Tears & Goosebumps’, and would house 13 tracks in all. The cover art and tracklist for the LP has also be unveiled to fans.

Fireboy DML and his team are yet to put out an official release date for the album.