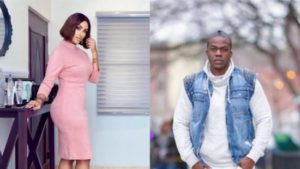 Juliet Ibrahim keenly moved on from her ex-boyfriend, Iceberg Slim over cheating drama but interviewers haven’t moved on from them; until they hear every tiny bit of how it happened.

HOT:  “21 years together, 15 years of marriage” – Yul Edochie as he celebrates his wife on her birthday

Juliet Ibrahim dumped revealed in a new chat with “DELAY”, that she dumped Iceberg Slim after his persistent communication with a lady Iceberg Slim claimed he broke up with.

She revealed that the lady was his girlfriend of 4 years.

In the interview, the Ghanaian actress stated that she had doubts about Iceberg, reason she made the relationship public

“I broke it off he didn’t expect it, he didn’t see it come when it happened, he was really devastated” she said.

HOT:  Lady Who Claimed To Be Pregnant For Davido Gives Update