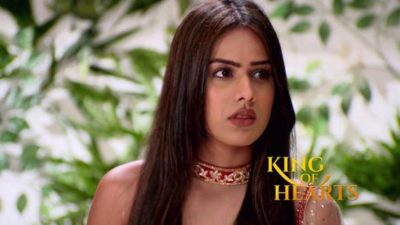 DD brings Roshni, Kesar and Resham to the hotel for the party. Roshni recognises it as Sid’s hotel. She asks DD who invited them? DD says they are high profile builders, the Khuranas. Roshni looks at Resham and Kesar who looks surprised.

A Man comes to DD and gives her flowers. She sees Simran and wonders what she’s doing here? Simran walks up to her and says she’s Mrs Khurana. DD says she has a feeling they’ve met before. Simran says they met at the hospital but they want DD to meet them properly because they are not the people DD thought they were. Roshni excuses herself.
Simran calls Raj and introduces him to DD. Raj wonders what Simran is up to. Simran says she would also like DD to meet their Son. DD gets dizzy.
Sid sees Roshni and tells her to come with him. He takes her to a corner and asks what she’s doing here? Roshni tells him to ask his Mum. She tells him her Mum is also here and they need to do something to make her leave.
Raj asks Simran what she is doing? Simran says she wants DD to know Sid is their Son so that everything can be okay again. Raj asks why she didn’t check with Sid first? Simran assures him that everything will be alright.
Sid bumps into DD. She accuses him of coming to the party for free food! Sid tells her that he has had so much to eat already. He continues to annoy her so much that she slaps him.

Simran and Raj rush over. DD tells them that Sid came to steal food! She asks if Simran knows him? Simran says he’s her Son. DD says she doesn’t believe it. Raj says Sid is not really their Son because he’s a Kukreja. Sid plays along and tells DD that the Khuranas are more wealthy than she is and they consider him a Son so DD should allow him to marry Roshni because he would take care of her. He calls Simran ‘Madam’ and she asks who he’s referring to? Raj makes her play along. Sid tells Simran that she should help him convince DD to allow him to get married to Roshni. DD says she now understands that Simran invited her to the party just to try and convince her to allow Sid marry Roshni. She says Sid is not her Son so why is she doing it? Simran stutters as she doesn’t know what to say. DD says she wasn’t expecting such a move from someone like Mrs Khurana! She pulls Roshni by the arm and they leave.
Later on, Sid asks his Mother why she did what she did? Simran says she hates to see him and Roshni stay away from each other. She starts crying and Sid apologises to her. He complains that he’s getting tired because one problem keeps popping up after another. He says the Doctor advised that they can’t stress DD out in a bid to make her remember things because it may be fatal for her. He thinks of an idea and says if they have to do something big then they need to plan something big. He takes Bunty aside to whisper to him.
Next day, DD tells Kesar that she wants to talk to the Police so she can get a restraining order against Siddharth! She tells Kesar to get the driver! Kesar goes into the house to fetch the driver. DD decides to drive herself. As she drives out, she steps on her brake sharply.

Sid is lying across the road like he had been knocked down. Bunty comes running and shouting that a rich Woman hit a Poor Man! A Crowd gathers. DD comes out of her Car and says she didn’t do anything. She tells Kesar to check him.
Kesar squats down to hold Sid. Sid whispers to him to make DD do something before the Police arrive. He pretends to be regaining consciousness. DD is relieved that he’s alive. Sid pretends to be hurt all over. He accuses DD of trying to kill him!
Kesar says the Police are coming because they can hear a siren. It’s actually Bunty playing a recorded sound on his Phone.
Roshni is inside the house wondering what Sid is up to. She hears the ruckus coming from outside. She rushes outside and she’s surprised to see Sid on the road. Sid tells her that DD knocked him down and he can’t feel his legs.
She holds him and suggests they take him to the hospital. DD tries to pull Roshni away. Bunty and Kesar pull Sid up and help him into the Car. They leave Roshni behind.
At the hospital, DD is on the Phone, complaining about the horrible condition at the hospital. A Woman walks past and accidentally bumps into her. DD’s Phone falls down and she asks if the Woman wasn’t watching where she was going! The Woman tells her off. They get into a heated argument.

A young male Doctor walks up to them and diffuses the situation. The other Woman walks away. DD thanks the Doctor and asks where he’s from? He says he got his accent from school in London. He gives DD his card. DD tells herself he’s a nice boy.
She gets outside and asks why Sid has his leg resting on her Car? She tells Kesar that she hopes Sid doesn’t intend to come home with them? Sid is in a Wheelchair and his leg is in a cast. He begs DD to take him home with her. She gets into the Car with Kesar and they drive off.
At home, Roshni asks DD how Sid is doing? A Police Inspector walks in asking for DD. Sid is being wheeled in by another Policeman. He points to DD and says she’s responsible for his condition! The Policeman advises DD to allow Sid stay so she can take care of him otherwise, Sid would report her to the media!
At night, DD takes out the Doctor’s card and tells herself that he is very educated and smart. She decides to do a background check on him and if it turns out good, she would want to introduce Roshni to him.
In the morning, Sid is screaming on the Couch. Roshni, Kesar and Resham are with him. DD tells him that she called a Doctor to check him. Sid panics. Roshni tells her it wouldn’t be necessary.
The young Doctor, Amal arrives and DD introduces him to Roshni. Sid realises what DD is up to. He throws some marbles on the floor but the Doctor side steps them. When Amal sits, Sid starts crying and shouting about the intense pain.

Roshni tells Amal to just give Sid a painkiller for now. Amal says he will prescribe some and he will be back later. Roshni walks him out. Sid tells her to return to him. Roshni goes back inside.
DD goes to Amal and tells him that Sid is only putting on an act. She says he’s a loser but he has made Roshni fall for him! Amal says they just met and she’s discussing her daughter’s personal life with him. DD says she knows but she likes him and wants to know if he likes Roshni? He says he doesn’t know as he only just met her. DD suggests he and Roshni go out sometime so he can get to know her. He says he doesn’t know but if she insists. She thanks him and he leaves.
DD enters the house. Sid bites on a watermelon and spits the seeds all over the floor. One lands on DD’s shoulder and she yells at him. She gets dizzy again. She gives him a bowl to spit the seeds in and she tells Roshni that she would sleep in her room because Sid will sleep in Roshni’s bed. She tells the Servant to take Sid to his room. When they leave, DD tells herself that she needs to get Roshni and Amal together.
Next day, Roshni and DD are in a health club. Roshni asks why they are there? DD sees Amal and calls him. Bunty carries Sid in. DD is livid. Amal is confused. Sid gives DD some balloons and DD pops them in anger. She invites him to come with her and talk! Sid tells Bunty that he doesn’t trust DD. DD takes them away. Roshni and Amal are left alone.

He tells her that DD wants him to propose to her. Roshni tells him all that happened with the accident and tells him she’s married to Sid.
Amal apologises and says he would back out of the proposal and won’t see Roshni again. Roshni thanks him and goes to join Sid and her Mum.