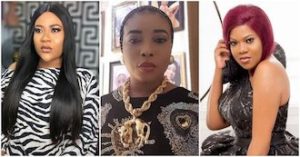 The Yoruba film industry was recently thrown into turmoil after an actress, Lizzy Anjorin, heavily blasted her colleague, Toyin Abraham on social media.

Anjorin had made several unsavoury claims about Toyin to the dismay of fans. Lizzy had accused Toyin of delivering her child in a local traditional home and that she has been unable to collect her child’s placenta from them because she still owes money.

HOT:  Davido Declares 1 Million Naira Reward For Whoever Finds The Ladies Who Accused Him Of Fake Prgenancy

She even added that Toyin has been feeding her child pap since his birth and that she does not have a house or car to her name.

Well, since the drama between the two actresses started, there has been notable silence from another actress, Nkechi Blessing Sunday, who happens to be Toyin’s very close friend.

Fans have now speculated that Nkechi perhaps snitches about Toyin to Anjorin, hence her silence. The actress has now denied those claims.

In a now deleted post that was shared on her Instastory, Nkechi explained that her silence is troubling her haters and she will make sure not to entertain them.

She added that it is only God who can separate her friendship with Toyin and haters should try harder. Nkechi also explained that Lizzy should provide proof that she is her informant. 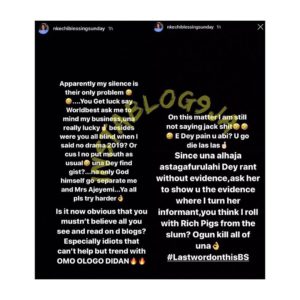