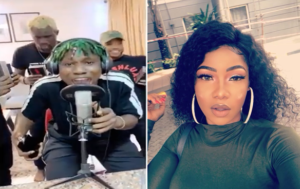 Ex-BBnaija housemate, Tacha has revealed that she has nothing against Zlatan for mocking her “Body Odour” in a song.

Prior to her disqualification from the big brother House, Tacha and fellow housemate, Mercy had a clash which lead to Mercy shaming her on the reality show with her body odour. The news trended for so long on social media and Zlatan known for following trends hit the studio by to release a track which was recorded in the Yoruba dialect. In the track “Tacha” which was produced by Rexxie sang, Zlatan sang about Tacha’s body odour and begged her not to kill everyone around.

HOT:  Zlatan To Feature Patoranking on His New Album

Fans felt that Zlatan had created the chance for strong animosity with the diss. However, in a recent interview with Cool Fm’s Dotun, Tacha thrashed such notions of her hating the singer. She revealed that she has nothing against him and is even a big fan of his music.

Watch the video below.

"I didn't see it as anything, I like #Zlatan and I love his music, it's all love" – Tacha responds, when asked about the video of Zlatan tagged 'Body Odour'

Zlatan Ibile has proved once again that he is socially responsible enough to bag brand endorsement deals from top companies. The singer has just announced his new deal with carbonated soft drink manufacturer, Coca-cola and […]