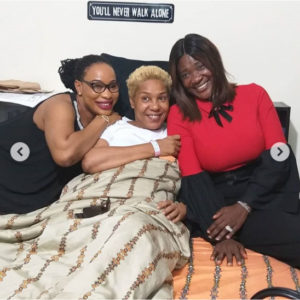 The Nollywood actress is still recuperating after undergoing a spine surgery, she was spotted walking for the 1st time after her surgery.

The actress was seen in the company of her colleagues in the Nollywood Industry, who had come to pay her a visit at the Abuja Hospital where she had the surgical operation.

Actress Mercy Johnson and her husband Prince Okojie, Segun Arinze and many others were seen with the ailing Shan George.

In the video, the actress could be seen walking with a support while being guided by the medical staff at the hospital.