The story of Big Brother Naija, “Pepper Dem” lovebirds, Mercy and Ike has been brought to the headlines again as Ike’s sister, Cindy took to social media to approve her brother’s romantic relationship with Mercy.

Ike and Mercy have been romantically linked together since they met in the Big Brother Naija House.

Ike’s sister, Cindy while reacting to a tweet which insinuated that the couple are “obsessed” with each other, said Mercy is the woman Ike has been searching for.

See the exchange below; 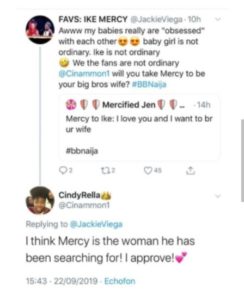