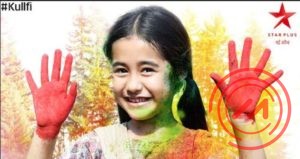 Chandan forcing Kulfi to sing. He plans to take Kulfi to ceremonies and functions for singing.

Amyra comes to Chandan and questions him why he is not helping her in the riyaz. Chandan says she is the daughter of a superstar and so doesn’t need to work.

Lovely gets shocked to see Sikander aka Chandan’s strange behavior towards Kulfi.

In the morning, Pakhi comes running towards Nandini and questions her about Bhola. She longs for Bhola and requests her mother to bring him back.

Bhola comes back. Pakhi gets delighted. She asks Bhola not to leave her alone ever. Nandini also warns him.

Lovely keeps an eye on Sikander. She fails to understand why Sikander is behaving so rudely with Kulfi. She says why Kulfi is having a doubt on Sikander.

Bhola tells Pakhi that he needs two thousand rupees. They take ten rupees and rush out to make it two thousand.

Kulfi finds the drug packet lying on the floor. She shows the packet to her remand home friends. Rocket sees the packet and learns that it is drugs.

Rocket states that Kulfi’s doubt might be true about Sikander.

Chandan comes to the recording studio and gets into an argument with the director.

Bhola and Pakhi decide to join a political procession to earn money.

Chandan meets a guy and offers himself as kulfis manager, and says he will make Kulfi earn a lot, Chandan agrees. Bhola and Pakhi in rally to earn for Nandinis books, Chandan kulfi and manager near by, Kulfi gets scared seeing the place, Chandan says this is campaign, election campaign, here we will meet politicians so just go inside and sing. Kulfi says I’m scared I won’t be able to sing, Chandan asks manager to go ahead and scolds kulfi and forces her to sing. Kulfi feels sikanders presence, and gets restless. Manager hands sikander money, Chandan says Kumar (manager) you look after kulfi I have important work and leaves.

you who must be missing you. Kumar says kulfi you have special room for you let’s go. Lovely discusses sikanders case with Nandini. Lovely says can one accident bring such drastic change, Nandini thinks of Bhola and says this can happen, I’m experiencing such case. Nandini consoles lovely and asks her to reach her if any problem. Kumar gets a call and leaves.

Bhola finds a cap, and wears it, ministers looking for Bhola Patwardhan, and starts calling Bhola, Bhola thinks they are calling him, they forcefully take Bhola on stage and ask him to address the party. Kulfi feels sikanders presence, and runs out. A member asks what will you do to eradicate poverty, and safety of women, Bhola unaware keeps talking irrelevant, Kulfi hears voice says its Baba, but unable to see him. A party member covers for Bhola. Before Kulfi can reach ahead, distraction is created to stop the campaign, all creat mess.

Kulfi and Pakhi get stuck, Bhola rushes to Pakhi and hugs her and asks where did that man with money go, Bhola and Pakhi rush out too. A man falls down and losses his specs, Bhola walks to him, with his bag, he gets happy with Bhola for his honesty and hands him his money. Pakhi stumbles and gets hurt, Bhola gets scared and asks for help, Kulfi thinks baba was near me where did he go.

Nandini scolds Bhola for taking Pakhi with her to the rally, Bhola apologises, and says I don’t know how to take care of her, I will learn slowly I promise, Pakhi says don’t scold him, it wasn’t his mistake, he did take care of me, Nandini says sorry to Bhola, and don’t worry about books I got them back, Bhola gets very excited, nani says will you forgive him so easily. Nandini says what you want me to do, calm down please, let’s go Pakhi.

Nani says to Bhola, I gave her the money to buy books, Bhola says thank you, nani scolds Bhola, and explains him what being husband is, and be worthy before calling one.