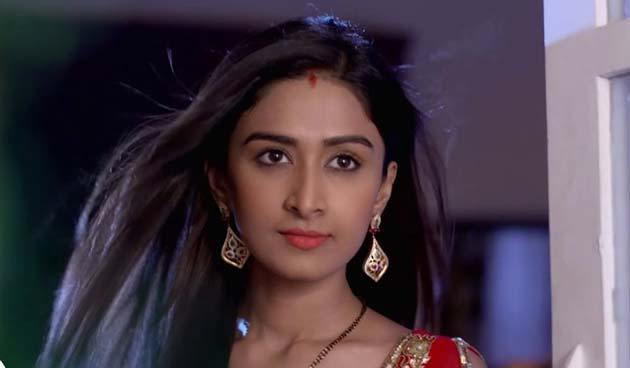 Jagan asking on whom will we rule if people die. Chandar says we will solve this mess, I will create the problem and then save them. Jagan asks how will this happen. Chandar says I have the cure of this disease. Jagan says it means you will come to cure everyone and then come out of jail. Chandar says till people show blind belief, our shop will run. Jagan praises him. He says you gave me an epidemic in hand. He laughs.

Raj serves food to the ladies. Mannu looks on and cries. Raj goes away and sits. Mannu sees Simran adding red chilli powder in Raj’s food. She asks Babli to give the food to Raj. Simran goes. Amba stops Mannu. Mannu asks what’s all this, Simran added…. Amba says he is servant, he has to eat what he gets. Jagan comes home. He asks Raj to get some water. Raj gets water for him. He goes and sits. Mannu says like this family is treating Raj, none treats animals like this. Amba says family loves animals who are loyal, we don’t trust this Raj, he is not loyal, he deserves this.

Mannu takes Raj’s food plate. Mannu gets her food plate. Mannu says I want you to feed me, I will feed you. Raj nods. He feeds the spicy food to her, not knowing about extra chilli. Mannu feeds food to him. They sit together and eat. Mannu cries. Amba looks on. Mannu coughs and cries. Raj looks at her. He stops her and makes her eat from her plate. He eats the spicy food and cries. Everyone looks on. Amba doesn’t let Babli take water for Mannu.

Gunjan gives sweets to Mannu and Raj. Gunjan asks Amba not to touch it, its shagun sweets. Amba asks what’s the good news. Gunjan feeds sweets to them. She says Preet is going to become Maasi. They all smile. Raj hugs and congratulates Aman. Mannu hugs Gunjan.

Amba blesses and hugs Gunjan. Panchayat members come. Gunjan asks Mannu not to lose courage, Amba will understand their love soon. Jagan goes to kitchen to add the powder in milk. Mannu comes and asks what are you doing. Jagan stops. He says I was seeing this lazy guy, he doesn’t do any work. He asks Raj to polish his shoes. Raj says its fine, I will do this. Mannu worries. Raj goes to clean shoes. Jagan keeps something in his pocket and goes.

The Heir 12 November 2019 Update on Zee World
Panchayat talks to Amba and praises her for becoming women’s voice. Mannu sits with Raj. Sarpanch praises Preet. Amba asks Raj to get juice for everyone. She asks Mannu to come to her. Raj goes to get. Sarpanch says Raj Bajwa. Amba says he is our servant. Mannu goes to help. Amba stops her. Raj says its fine, I will take it.

Amba tastes juice. She throws it on Raj. Mannu shouts. Amba scolds Raj. Raj says its fine, I will make other one. Mannu says juice fell on you, see you got sticky, I will clean it. She cleans his clothes by her dupatta. Amba asks Simran to get juice. Mannu thinks Amba can test our love, but she can’t separate me from Raj.

Jagan asking Raj to give the milk to Babli and kids. Panchayat leaves. Raj smiles seeing Mannu dancing with everyone. Na sikha maine…..plays…. Babli falls down and expels foam. They all get shocked and get her to the hospital. Jagan asks doctor about Babli. Raavi says I have to meet her. Doctor says no, her disease will pass on to other, you can’t meet her, we are trying to save her. Jagan says someone save my daughter. He shouts and gets angry on the ward boy.

Raavi stops him. He says I love Babli, she is my blood, just Chandar can have cure of this disease, doctors can’t help her. He says Preet has sent him to jail, she will not apologize, he will not give us the cure. Raj goes to chemist and asks for medicines. He buys the medicine. He goes back to hospital. He says I got the medicine. Raj feels unwell. Doctor says we gave medicine, but Babli’s state is still the same. Amba says what does this mean.

Chandar’s man gives money to chemist. Chemist says I gave wrong medicine to Raj. Jagan messages Chandar. Raavi asks how will we save Babli now. Jagan says this happened because of Raj, he has spread this bad luck in our house. Mannu asks are you mad, what did Raj do, he saved us, we are worried for Babli, you are fighting.

Raavi asks Amba to save Babli. Mannu consoles Raavi. She says we will go and get medicine. Raj says no use, chemist said he had that last bottle. Mannu says how can this happen. Raj says chemist doesn’t get these medicines as such diseases don’t spread in our village.

Sarpanch and other panchayat members get a girl having same disease. They rush the girl. The lady says don’t know what she has eaten in Amba’s house. Mannu takes Raj away. She says they both have same disease, its not common, something is wrong. She recalls Jagan’s words. She says Jagan told you to give milk to kids, was there anything in milk, Jagan went in kitchen too.

Raj says yes, do you think Jagan did this, he can’t do this with Babli. She says Jagan gave Babli to Chandar, he can fall much low, we will go and ask Jagan what he did. The man scolds Amba for his daughter’s state. Sarpanch says this happened from your house, bad is happening with us. The man says I will never let you become Shahni if anything happens to my daughter. Amba says I didn’t do this. Panchayat gets angry on Amba.

Jagan says what will we do, Chandar can help us, he is Lord for us, he can give a life to the girls. He asks Amba to think for everyone, help us. Mannu says Chandar is a devil. Jagan says our daughters are battling for life, we will do anything for them. Sarpanch agrees with him. Amba says I will go to Chandar. Raj says Preet stop your mummy.

Mannu says think situation is much bad, its Chandar’s plan, Jagan is with him, we have one way to stop this, we have to find right medicine, Chandar has the cure, he wants to become angel and come out of jail, we have to make kids fine before he does.